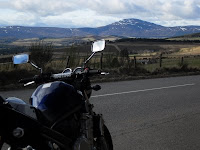 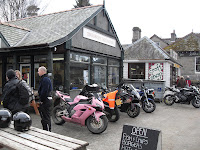 ...all the bikers have turned up". So said the waitress at Braemars'finest cafe lunchtime today. And she was right on both accounts... there were about 15 bikes AND it was sunny and warm (well, 11 degC is judged warm here) I even unplugged the heated vest!!

I also got to check the other bikers riding apparel, and found (ref my previous blog about helmets)that it's true, the more mature riders to tend towards black or plain helmets. One gentleman did have a shocking pink Mohawk attached to his (black) lid, which livened it up considerably.

So, I'm going to continue to look for chrome tape, and ride as much as possible before summers' tourists clog up all the lovely roads pottering along admiring the scenery.
Posted by El Diente at 16:34 2 comments:

I've had my present crash helmet about a year now, it's a flip front (I prefer them 'cos it's easier to put on with my specs on). It's also been extremely uncomfortable which is not a good thing. I thought it would wear in, but I still find after 30 mins riding a pressure point on the front of my head which means I'm not enjoying the ride.

So yesterday afternoon I nicked off work early (again...haha) and went to our local large motorcycle gear supplier. Blimey these helmets are getting more expensive, aren't they? Anyway, after talking to the nice man, I actually bought another helmet from the same manufacturer as the one I've got - although evidently this one was designed by Michael Schumaker.

First ride to work this morning (on a Saturday,got to make up for that rate cut somehow!)it all seemed much better. Its a bit smaller, lighter, and has a pinlock insert so my spec didn't steam up at every traffic light. Good stuff. I even got a £100 discount for a special sale offer they had on. Still cost £340 though

The thing is, they only had a black one - evidently the more mature riders who wear these kind of helmets seek out plain colours, which is obviously an untruth 'cos I was looking for something brightly coloured with patterns all over it! So I'm not sure what to do now. I think you can get helmets painted, but thats probably going to cost more than I paid for the helmet.

When I was a lad we used to stick chrome tape on our helmets, but then we never wore them anyway and they were so battered about I'm not sure they would have served a purpose. Does anyone know if you can get tape (ideally black and chrome chequer-patterned) that is suitable?
Posted by El Diente at 09:04 1 comment:

Cosmetic or functional addition to the bike? 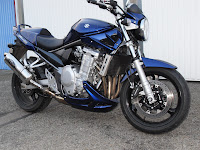 As part of my cunning plan to make up for the rate cut my employers have imposed by working less, I left work early today and fitted a belly pan to the bike. The thinking behind this was that fitting it will either (a) increase my top speed by its streamlining effect, or (b) stop road muck being thrown over the exhaust downpipes and thus decrease my cleaning time.

I then popped out for a ride to test it out, only to find the top speed hadn't in fact gone up, and the exhaust still got dirty. Looks nice though. I thought I'd put a photo up so you can see it. I did have a bit of a moment though; was nipping along a nice long straight road when I saw a car waiting to pull out. It's daylight; I've got the headlight on; the woman driver looked at me and stopped - then just as a I got level to her she pulled out. Bloody Hell scared the life out of me.

A survey recently done among car drivers showed that something like 25% of people admitted they couldn't see well enough to drive properly, and that they probably should be wearing specs. So when you shout out "Oi, are you flippin' blind?" they probably are.
Posted by El Diente at 18:09 1 comment:

Was it only two days ago since that last horrible cold biking experience? Here we are on Tuesday and its a sunny 13 degC in Aberdeen. I decided the only thing for it was to invent a meeting I had to attend on the other side of town, got the bike out and spent a couple of hours just riding around the lanes. Brilliant!

Not only did I feel happy, but by nicking a couple of hours from work I made up for that rate cut they've just imposed. Let's hope the weather stays the same for two days running; I'll do it again tomorrow.
Posted by El Diente at 20:24 No comments:

I'm supposed to be spending today completing an assignment for my OU course, deadline next week. Instead I'm dicking around reading bike magazines and checking e-bay for parts. Then Derek phones and says he and Sean are off for a ride, do I want to join them? Well I must admit the temperature has hit the balmy heights of 5 deg, although theres still plenty of ice and snow lying around, so I think I'll give it a go.

The drive up to the garage where we keep the bikes is still snow/ice covered, but Derek assure me it's no problem to ride down "just put both feet down on the slippery bits". I must admit to a few misgivings while kitting-up, but put it down to age-related lack of bottle. We set off, get to the corner and down I go. Bugger! Slippery stuff this ice. And this Bandit isn't exactly the lightest bike around. The boys help me to haul the bike upright, and off we go.

Unfortunately, the roads are bloody awful, mud and crap all over them, rivers running across where the snow is melting in the fields, and it's COLD. I've got the heated grips on, so there's that strange feeling of having warm palms and frozen backs-of-fingers. The two young lads disappear of into the distance leaving me to try and fend off a mad BMW intent on running me off the road for(presumably) not riding fast enough.

Eventually I've had enough; when we get to the turn-off for Stonehaven over the slug road I bottle-it and turn round for home. I decide to ride back on the main road, and it's much clearer, cleaner and nice to ride. Still cold though.

Derek's just phoned to say they got back OK, they had a dodgy bit riding on some ice with gravel underneath(!) but managed not to fall off. And I'm still not doing what I should be doing, and I've noticed there's some good films on the tele tonight so I've only got a couple of hours left. Bugger.

Oh and the irony is, I've bought some crash bungs but hadn't got round to fitting them yet 'cos it was too cold.
Posted by El Diente at 15:12 No comments:

Labels: fit crash bungs before you fall off.
Newer Posts Older Posts Home
Subscribe to: Posts (Atom)
... I loved that basketball so much I even used to sleep with it under my pillow - maybe that's why I couldn't sleep...