Another great day out 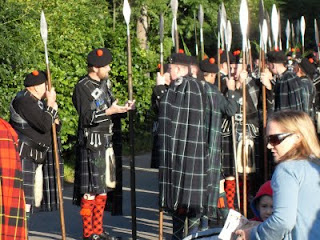 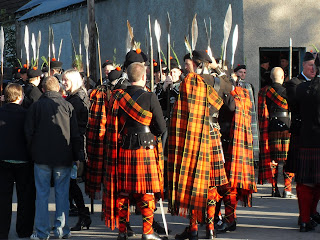 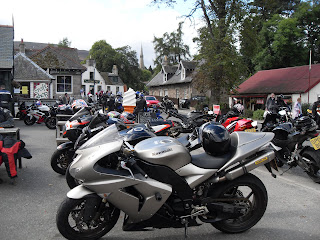 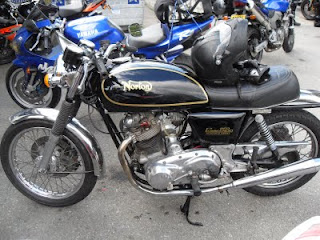 Got up at the crack of dawn today and rode up to Strathdon in the Highlands. The event was the 168th Lonach Highland gathering and games. Following a tradition going back to 1823, the Lonach Highlanders, comprising members of the Forbes family and their clansmen, march around the village accompanied by a pipe band and visit each house. There they are given hospitality which comprises of a wee dram of whiskey. The march starts at 8am and finishes at 1pm; the Highlanders are followed by a horse-drawn cart which is to provide transport for anyone overcome by too much 'hospitality'. According to the elderly Scottish gentleman beside me, no-one has needed this assistance - ever. They then march into the park where the games have been going on since 9am and march around the field.

All very colourful, and the sun came out for a while to make it an even better day. By lunchtime I was feeling a bit overwhelmed with the crowds, so I got on the bike and rode up and over Tomintoul, past the Lecht ski-slopes and headed down to Braemar for a cup of tea. Just outside the town I spotted a bike coming up fast behind me - then he was past and gone, on some kind of old bike. I caught up with him and he stopped outside the cafe - a nice old Norton. For some reason it was a biker day at the caff, plates of chips everywhere! Had a nice rest then rode home. A very enjoyable day out.
Posted by El Diente at 17:11 1 comment: 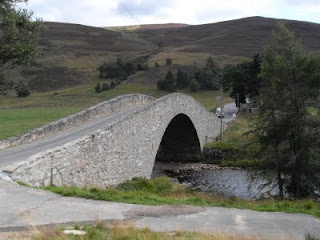 Well my planned escape for a week or two with Steve to explore Northern Scotland hasn't worked out - he just can't handle the weather up here and has decided he wants to go somewhere warmer and sunnier. What with that and the non appearance of my seat sent away for a gel insert, I've given up on the long distance rides.

However, as I live in a great part of the country for empty,winding roads I decided I'll just keep going out for day rides. So yesterday I drove down alongside the River Dee to Ballater, stopped for coffee and chocolate cake then turned off the main road onto a single track road that went up to Glen Gairn, then followed an old military road up and into the Grampian mountains. What a laugh! The single track road was full of crests and dips, with no traffic I was able to get air under the wheels for the first time.

The road went back down towards Braemar; it was just so nice riding along, a different view around every bend, the hills are now turning purple with heather and there's still plenty of wildlife to be seen off the beaten track. Had a great ride and the sun even came out for an hour or two. Stopped beside the hump-backed bridge in the photo and had a laugh watching cars trying to negotiate it; you can't see in the photo but it's single track and its impossible to see who's coming the other way - hours of fun watching cars backing up and down in the sun. Then when I got back to the cottage I decided to ride up the track into the forest and disturbed a couple of deer frolicking around - now that was a great day.

Now today I'm supposed to spend the day in front of this laptop; my final assignment for the course I'm doing is due in 3 weeks and I've about 3 months-worth of work still to do but the sun is shining and I can almost hear the bike whispering ride me, ride me; curse you Bandit!
Posted by El Diente at 12:29 No comments:

http://www.motorcyclenews.com/MCN/News/newsresults/videos/2009/July/jul3109-video-funny-automatic-garage-door-opener/
Posted by El Diente at 11:12 No comments: 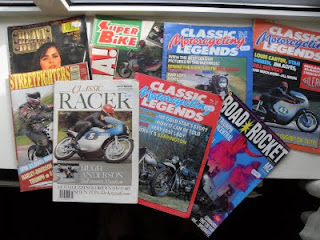 Sometimes, it's the little things that change a boring day to an enjoyable one. I had to work today, took the bike and halfway through the urgent (aren't they all) job I looked out the window and the sun was shining. This is quite an unusual event here in the North East so I left work and went for a ride, but be assured I will book the whole day!

A while later I was sitting outside a caff in the pleasant little town of Ballater drinking coffee and eating one of their delicious chocolate cakes watching the world go by and considerably cheered-up.

As I had finally fitted my new luggage (found that M6 x 60 bolt I needed in a bin in the local feed store - 20p, bargain!), I decided to browse the second-hand bookshop next door where I knew there were loads of bargains to be had; I usually can only buy one book at a time and stuff it inside my jacket but now I knew I could buy loads of worthless junk.

Anyway, there tucked away in a corner was a stash of old bike mags, result! I rode home post-haste to read through them and now I'm in heaven. Old bike mags and 'sounds of the seventies' on the local radio station, serendipity or what - colour pictures of an Ariel square four with the Stones singing 'you can't always get what you want'AND a Belgian chocolate brownie I got from the caff, it doesn't get much better.

I particularly like the sound of this film advertised in 'Road Rocket no.2' (I know I don't remember it either) 'My little sister rides a motorbike' by Anne Parisio a black and white homage to the rockers of the fifties - wonder if you can still get a copy? Oh and the letter pages are brilliant "If Road Rocket is meant to be a NEW motorcycle magazine, its PATHETIC. A couple of pictures of Vic Reeves and his mates, some poxy astronaut and a jerk wearing platforms doesn't make it new, it makes it PATHETIC. Give up, you wankers" - straight to the point, eh!

So now I'm torn between a fifties British bike fitted with one of those beautiful nose cones, a modified Harley chop with a semi-naked young lady draped over it, or a drag bike!

REALITY - those flimsy extended footpegs I bought only lasted one ride - I couldn't persuade my old arthritic knees to pivot enough to allow me to brake or change gear - the boss that screws to the footpeg mount forced my big feet outboard enough that I couldn't reach the padals. Oh well, back to the drawing board.
Posted by El Diente at 16:24 No comments:

Labels: old bike mags, seventies music
Newer Posts Older Posts Home
Subscribe to: Posts (Atom)
... I loved that basketball so much I even used to sleep with it under my pillow - maybe that's why I couldn't sleep...