A treat on a bad day

I had to go to Manchester today so a man could put his hand up my bottom and fiddle about** (I know some of you will be wondering why I travelled so far when I could have got the same thing done free at my local public conveniences...) which meant a round trip of 400 miles in one day, so I went in my car. Fortunately, the route went through Birmingham, so I treated myself with a visit to the National Motorbike Museum, which I'd intended visiting last Saturday but didn't make.

Well, it was Fantastic! A large modern building, it had five, well-light halls crammed with British motorbikes. Names I hadn't heard of; every British manufacturer from Abingdon and AJS through to Williamson and Wooler (I particularly liked the Wooler Flying Banana); fantastic bikes of all description from early bicycles with engines right up through 30's to 60's plus some modern machines; prototypes; oddities; racing - bikes of every description. It truly is bikers heaven. I thoroughly recommend you to take a trip there wherever you live - it really is that good. I took loads of photos, here's a small selection. 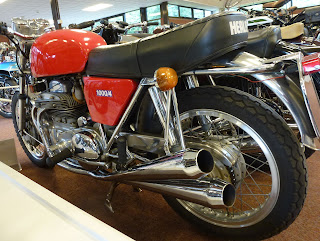 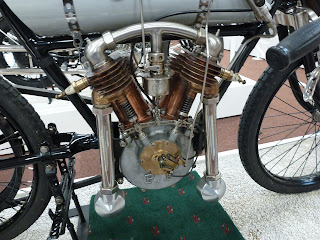 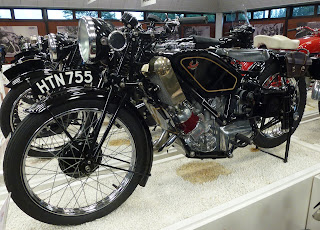 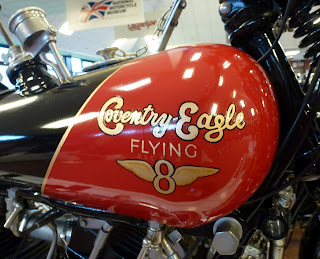 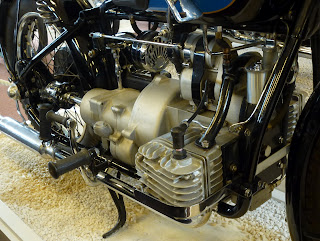 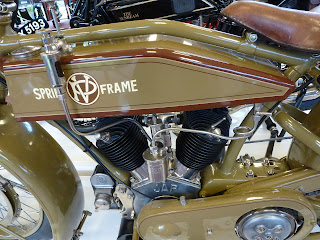 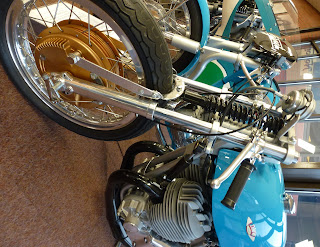 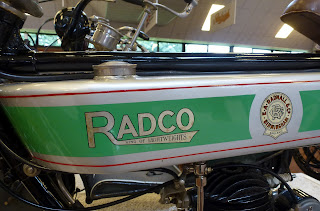 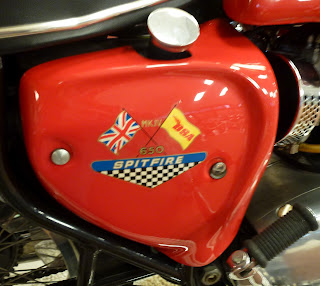 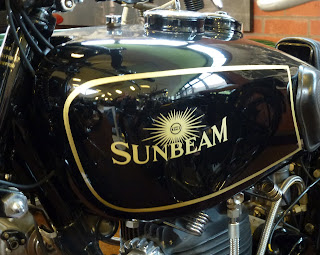 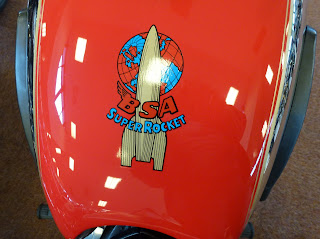 **Christies cancer hospital - my prostate cancer has reappeared after apparently going away for seven years - bummer! (unfortunate choice of expletive there).
Posted by El Diente at 20:28 4 comments:

I took a wrong turn and ended up in biking heaven

As summer has finally made an appearance I thought I'd plan a longer, more interesting trip than my usual local rides. I decided I'd like to visit the national motorcycle museum, on the outskirts of Birmingham. As this is 'up north' to a London lad like myself, I went to the bother of looking at a map. The obvious route for a non-biker would be straight up the M40 motorway, but that would be no fun. As I was studying the map, I noticed quite a few towns and villages to the west of the motorway all had names with hyphens, so I decided to 'ride the hyphens' or more accurately, 'ride-the-hyphens'. So, this morning saw me up early and out on the road, a list of towns and road numbers scribbled down on a piece of paper in my jacket pocket. I headed out west on the A40/M40 then turned off to go through my first town, Henley-on-Thames. Now I must add here that I intended stopping and taking a photo of the Triumph in front of each town sign to prove I'd been there, but there was so much traffic I didn't bother at Henley.

The next town on the list was Stanford-in-the-vale, which I was quite excited about visiting as it had three hyphens; unfortunately, it was about now that the fatal flaw in my plan made itself known - I have a terrible memory, made worse by age, so all my efforts to remember the road numbers or indeed the intervening town names came to naught. I found myself lost and turning into increasingly-narrower and narrower roads somewhere to the west of Oxford. Then I spotted a sign for Woodstock, which made me start singing " by the time we got to Woodstock they were half-a-million strong" etc, and realised I was miles away from my route. I eventually stopped and checked my i-phone satnav and realised I'd already missed Stanford-in-the-vale and Lechlade-on-Thames, but had a fighting chance of finding Shipton-under-Wychwood. I also noticed that all traces of traffic had melted away, and I was now riding down long, sweeping roads with the Triumph feeling nice and steady and the engine finally loosening up, the open silencers making a  particularly spine-tingling sound . A couple of more wrong turns found me riding down a single-track road, when I spotted a sign for a Roman villa. Thinking this would make an interesting diversion, I parked-up and walked down a long lane, only to be confronted by some old stones in the middle of a field - not what I'd anticipated. However, it did give me time to stop, rest and consider my next move.


As Trobairitz often lists items in her blog, I thought I'd steal her idea and list the things I realised in that field:


Once I'd made that realisation I decide to just enjoy riding these lovely roads, and end up wherever - with the proviso that if I spotted a hyphenated name on a road sign I'd head there; which is how I managed to ride through Shipton-under-Wychwood, again without stopping for a photo. More and more heavenly roads, until I reached Burford, which is one of those picturesque Cotswold villages, all honey-coloured stone, thatched roofs and, on a day like this, a bustling high street with everyone sitting outside the pubs watching the old convertible cars parading up and down. I stopped for a Cream tea in a delightful cafe and enjoyed watching the world go by. I also checked the i-phone again and realised I'd ridden south and west, now with absolutely no chance of getting to that motorcycle museum today. 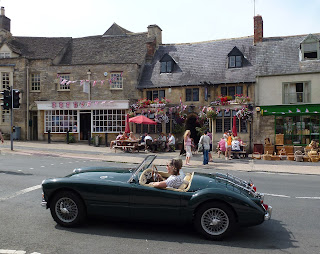 I wasn't far, however, from Lechlade-on-Thames, so set off in that direction. By the time I got there I realised I was getting tired, plus the only way I'd get any more hyphenated towns was to backtrack up north, so I took an instant decision to head for home. Going back through Marlborough, Newbury and Thatcham the riding was still excellent; I bypassed Reading and picked up the M3 motorway back up to west London, finally got home around 5.30pm. So that was nine hours and 250 miles - and I didn't really go anywhere! As you can see from the lack of photos, I also failed in my attempts to 'collect' hyphenated' town photos. Hmm...must try harder next time.
Posted by El Diente at 19:36 4 comments:

Today I finally got round to visiting the London Motorcycle Museum, tucked away down a side street over in Greenford. Rode the bike through the gridlock that is London during the Olympics and got soaked a couple of times by the sudden downpours that characterise our 'summer'. It's a quaint little place, full of interesting bikes and enthusiastic staff who're happy to spend time explaining the detail of the bikes they have there. What was impressive was the mixture - in the main room were loads of different makes, including some real oddities, while in another building around the back were the Triumphs, including 4 or 5 notable prototypes. Here's some pictures. 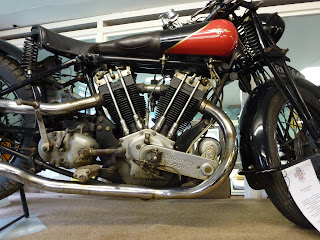 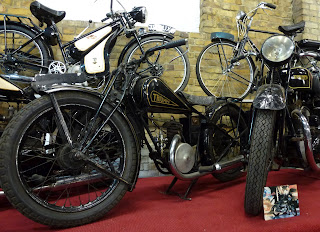 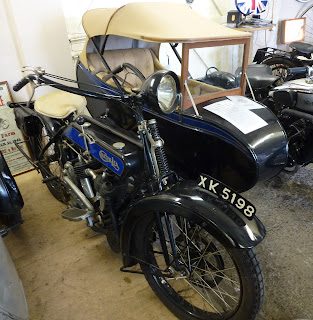 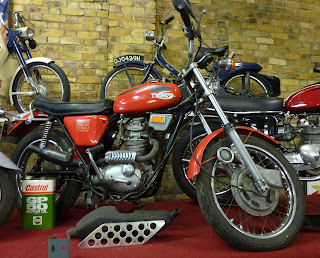 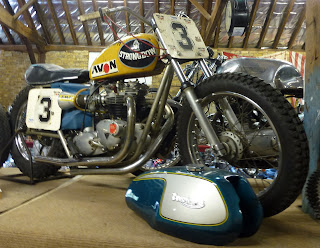 Labels: London motorcycle museum, prototype Triumphs.
Newer Posts Older Posts Home
Subscribe to: Posts (Atom)
... I loved that basketball so much I even used to sleep with it under my pillow - maybe that's why I couldn't sleep...