It seemed as if Saturday could be the last day of summer, so I decided to make a visit to Findhorn, up on the north-east coast near Inverness. Got up early and had a fantastic (if freezin') ride up over the Lecht, down through Tomintoul and Grantown-on-spey, up to Forres and on to Findhorn.

Arrived at the 'city of light' as immortalised Eileen Caddy's books, and Mike Scotts "Long way to the light" (http://www.last.fm/music/Mike+Scott/_/Long+Way+to+the+Light?autostart)mid-morning to blazing sunshine and blue skies.

"Hang on El D" I can hear you saying, "bikers and hippies don't mix". Well, I look at it like this - bikers love the idea of freedom, right, isn't that why we do it? So if you're into mechanical stuff, then living off-the-grid has appeal, all those windturbine gears and batteries and wires and stuff and dare I say it living outside the system ... And meditating is pretty much the same as riding a bike - 'empty your mind of all thoughts and concentrate' well thats what I have to do or I fall off!

Anyway, I had a wander around the eco-village, which is really what Findhorn is famous for - they pretty much developed eco-housing, self-sufficient living and community ideals, having first set-up back in 1962. It's a fascinating place, and I have to admit I've made a few trips there over the years. They've also got a great little cafe so I had a nice lunch in the sun and pondered all those questions like..what next? I haven't really got my head around being 60, I should be a grandad but I feel like I'm a grandson - if you know what I mean?

Whoa, this was all getting a bit heavy, so I decided to ride off and visit Loch Ness instead. Didn't see Nessie, saw some great scenery and empty riding roads and spent the rest of the day inside my head. Got home late, weary and saddle-sore, fell into bed and slept like a log. Suicidal Sunday, crap Monday at work; I'm thinking its time to move on from here. I'm still going to keep on riding though 'till the arthritis gets too bad. Must test ride a Harley, they're good for old men, right?
Posted by El Diente at 20:54 No comments: 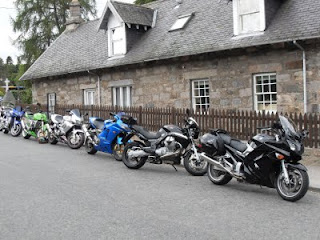 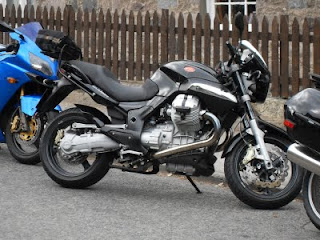 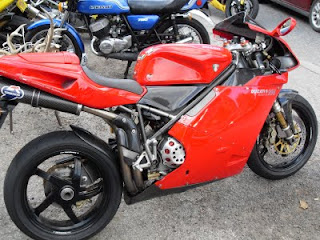 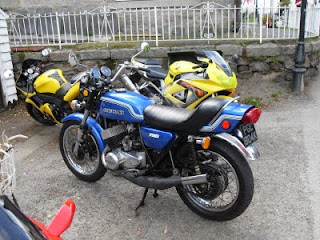 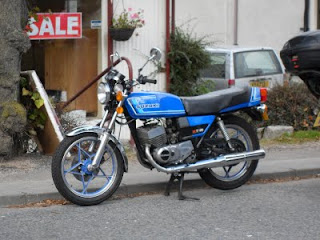 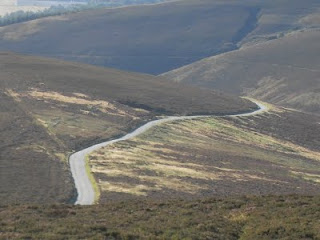 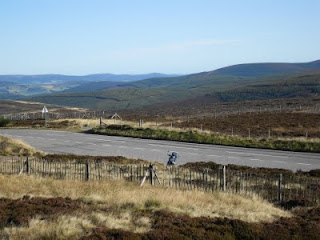 Got up early today, rode up and over Cairn'o Mount down to the coast to visit an old pal. Then down to Forfar, back over Glen Shee to Braemar then home. The sun shone, my eye seems OK; all is well with my world. Loads of bikes outside the caff enjoying the sunshine, saw a couple of different ones. Another great biking day!
Posted by El Diente at 17:07 No comments:

It has been only four weeks since I last rode my bike, but it felt like a lifestime when I got on yesterday. I wobbled off down the road like a learner, my only excuse that it was extremely cold and I had forgotten how awkward winter gloves feel the first time back on. Oh, and I was trying to concentrate on seeing properly - I broke my eye 4 weeks ago and its been like trying to peer out through a black lace curtain, so no driving. The very pleasant young lady at the hospital offered the explanation that "these things happen when you reach your sixth decade" which I suppose was a nice way of saying you're an old git, what do you expect. I was also a bit nervous as I'd fitted a new front tyre the day I broke the eye, so that wasn't scrubbed in, and the road was pretty slipperry (frost in September - one of the wonderful things about living in NE Scotland).

Anyway, once I got a few miles under my belt it all felt great again; isn't riding a bike just one of the best feelings in the world?
Posted by El Diente at 08:40 No comments:

Labels: broken eye, new tyre, pretty doctor
Newer Posts Older Posts Home
Subscribe to: Posts (Atom)
... I loved that basketball so much I even used to sleep with it under my pillow - maybe that's why I couldn't sleep...