I've been looking at the different types of bike used here on the island. While the tourists go for the 4-wheel  off-road thingies, the locals seem split between cruisers and sports bikes - nothing different there, right? However, the cruisers are either Harley's or big Suzuki M1800's, pretty standard offerings with lashings of chrome; whereas the sports bikes mostly seem to sport madly elongated swing arms. I'd spotted a few, pretty ratty-looking things with faded paint and bald rear tyres, then the other day while downtown I heard that unmistakable noise that comes from big-bore bikes with minimal silencers. When I strolled over to look, there was a group of bikers sitting around drinking at an open-air bar, parked in front were a number of Suzuki Hayabusa's with those extended swing arms, but done really well. I have to say the guys all (apparently) had a bit of a 'fuck you' attitude to the passers by, as nicely emphasized by one guys' crash helmet graphics. I'm not sure what its all about; I did see plenty of similarly modified bikes in use so not just for show, it just seemed all wrong. Maybe its something to do with the theory of evolution, how birds on different islands develop different beaks .....? 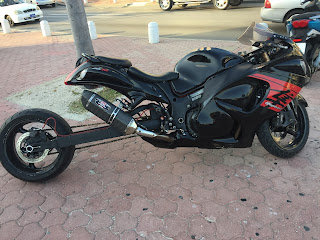 Update - today (Sunday) is Aruba flag day, a national holiday. I was minding my own business down on the beach when the sound of hundreds of bikes deafened me. I walked up to the road, and managed to snap a few more bikes. Right in front of me, two of those kooky Suzuki's pulled out of the parade, the riders obviously overheated as they parked and ran to a beach bar to get a cold beer. I approached them and politely asked why the swing arms were so extended. The answer came back 'for drifting'. Me, I'm still no wiser, but maybe one of you will know. 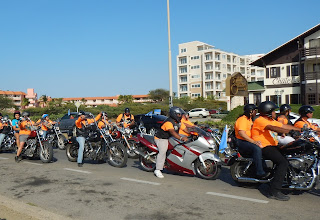 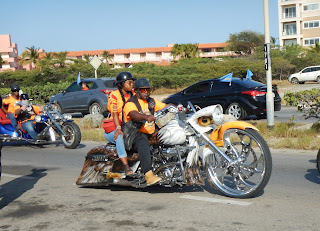 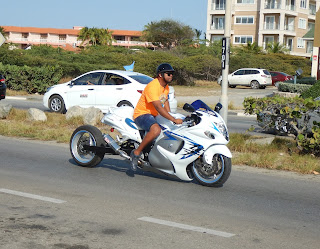 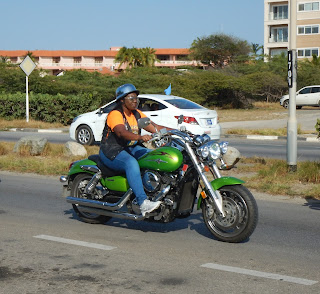 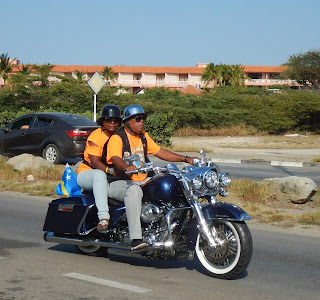 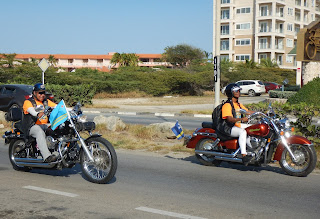 Ten and a half hour flight from Amsterdam, arrived in Aruba Thursday evening 2 weeks ago. The island was pretty much as I remembered it from 25 years ago when I used to visit while working in Venezuela, apart from more high-rise hotels up at the North end of the island. The capital, Oranjestad, is chocolate-box pretty with multi-coloured buildings, the beaches are still wide, white sand and the sea crystal-clear light blue. I found a nice cheap funky apartment 10 minutes walk from Eagle beach and next door to a supermarket.

I spent the first few days moping around trying to stay miserable, but then I decided to snap out of it, grow up and face reality so no more moaning about health issues. I promise. Met a nice American couple at the pool, so have had someone to talk to most days. Have been eating plenty of salads and fresh fruits, with the odd restaurant meal; there's a few vegetarian cafe's around so always somewhere to eat. Been exploring the island, mostly on foot, although I did rent a Jeep for a day to venture in the national park - bit of a waste of time really as its all just desert.


The rest of the time I've really just been relaxing either on the beach or around the apartment pool - really boring with nothing much to report. Still, its got me away from the worst winter Britain has had for many years, so that was worth it. Hopefully something interesting will happen during the next couple of weeks!

Labels: Aruba, sandy beach.
Newer Posts Older Posts Home
Subscribe to: Posts (Atom)
... I loved that basketball so much I even used to sleep with it under my pillow - maybe that's why I couldn't sleep...