Spotted some different stuff while out riding yesterday.
Not sure how this handles round bends 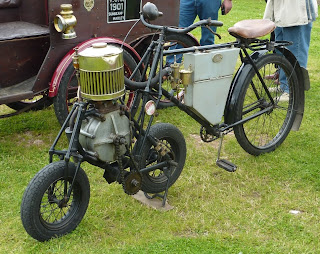 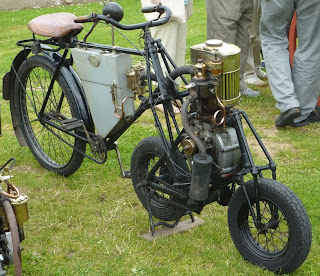 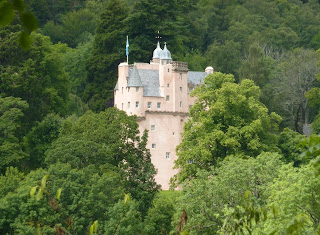 Not sure when the invasion started 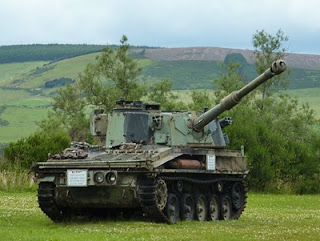 I had a great ride into work this morning - at 6.30 am on a Saturday there were no cars bumbling along the country lanes at 40 mph...heaven. To add to the enjoyment it was a beautiful morning, the sun was shining, mist on the fields, just one of those days when it was all perfect. It only took 20 mins to do the 25 mile ride from Banchory into the city so it was a contented El D that arrived at the office to find no-one else was working today! Excellent; I spent the early morning catching up on all the other bike-related blogs, especially enjoying the photos from foreign parts. I really am envious of all the bikers who seem to think nothing of setting off on days or weeks of touring - a two hours ride and I'm knackered. Maybe one day...in the meantime I've got a valve schedule to finish today (yawn) before I get to ride the long way home.
Posted by El Diente at 07:42 4 comments:

Keep control of those thoughts or you'll fall off......

I popped round to see Derek after work today; his R1 is in bits in the garage due to a siezed exhaust valve and the track bike looks like it exploded, so there were lots of pieces of metal to pick up and examine closely while exclaiming bloody hell and suchlike.. As we were chatting, he noticed my bike still had the removable baffle in the Scorpion can, so quicker than I could say anything he had the baffle out and the bike revving its nuts off. During the ride home I realised that it was now possibly much, much faster but definitely much louder. I was trying to come up with a comparison for the noise, you know, WWII airplane or something mechanical when it dawned on me that it sounded like a big fat lady who'd had baked beans for breakfast letting off a fart just as she was getting out of a wetsuit.

I spent the whole ride home wobbling about as I kept laughing at that mental picture which of course got more and more ridiculous with each mile.
Posted by El Diente at 20:45 No comments:

I'd been checking the weather forecast for the weekend - there was a 30 deg heatwave! forecast for London and the south-east of England, gales and heavy rain for the north-east of Scotland; seemed like a perfect time to pay a long-overdue visit to my 89 year-old Mum.A quick phone call to her  to make arrangements elicited the response that she was going to a "celebration of Essex Girls "on the Saturday. Now here I must declare that I don't understand the fuss made regarding  the sexist stereotype of Essex girls as promoted by comedians and the gutter press - they are portrayed as blonde bimbos with fake tans, large breasts and an easy attitude to sex. Having spent some of my teenage years living in Essex, I certainly never met anyone like that...unfortunately!

So I hatched a plan to fly down to London Friday night, hire a car and spend time with the Essex girls.I managed to find an internet deal on accomodation; Friday night found me relaxing in a Sheraton 4 star hotel for the princely sum of £44 - result! I picked up the car, a mercedes AMG sport which cost several times more than the hotel room, but had excellent air-conditioning and a fancy flappy-paddle gearbox controlled from the steering wheel. Not that it mattered how quickly the thing changed gear, I spent most of the weekend creeping around in traffic bloody hell it was murder no matter where I went.

First thing Saturday morning I headed for Jack Lilley's Triumph dealership, they do custom Triumph bikes and I was curious to see what they had, At the entrance was a huge Rocket 3 in black with all sorts of extra bits on it, it looked EVIL but extremely HUGE. They also had a custom Thunderbird, but not unfortunately the Steve Mcqueen great escape Scrambler. Next stop was to be the Victory showroom, but some time spent in traffic jams and 30 degree heat made me decide to turn around , head for the M25 motorway and zip round to South London to see my daughter - unfortunately the Blackwall tunnel was closed for repair, so the whole south-east corner of London, Kent and Essex was at a standstill! So I aborted that idea and headed straight to Chelmsford in deepest Essex.

The Essex Girl celebration was taking place in Hylands house, a stately home set in parkland. First suprise was how brown and scorched everything looked, it looked more like Arizona than Essex, and felt just as hot.The celebration was intended to show that Essex women did not conform to their stereotype, but were capable intelligent women. My Mum was there because in 1932 she joined a band called the Dagenham Girl Pipers, an all-girl bagpipe band that travelled the country entertaining; they also travelled to the USA early in WWII, Sweden in the 50's. Of course now the band members are all in their 70's & 80's, but were a sprightly bunch. 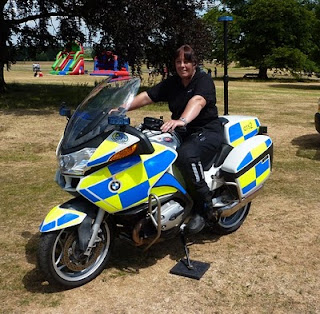 I wandered around the grounds enjoying the heat and sunshine, visiting the various stalls set up to demonstrate the capabilities of Essex girls. Thats where I met my first female Police motorcyclist - we had a chat and I must admit to being stricken...arrest me, arrest me!...but was politely rebuffed and wandered away, disconsolate. Spent the rest of the weekend enjoying the sun and chilling out with 3 Essex girls in their 80's, Mum and two Aunties. Sweet.
Posted by El Diente at 20:35 1 comment:

A walk up the hill...what, with those legs?

For some reason that now escapes me, I agreed to walk up Ben Nevis; not for charity, just for a walk. It wasn't too bad going up, took about 31/2 hours. It was a bit foggy and cold up top, then while we were tucking into our sandwiches the cloud cleared and we got some amazing views. 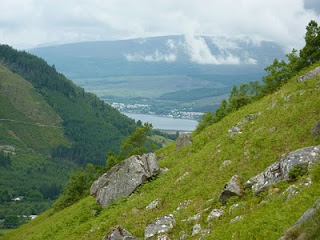 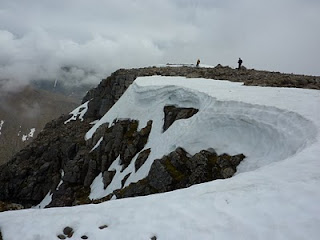 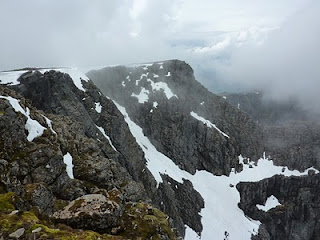 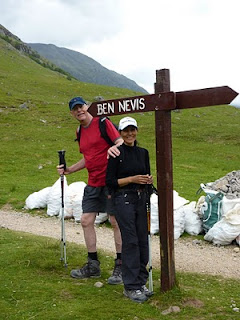 Coming back down knackered my old knees even more; the guys in the office tell me I look quite comical trying to lift my leg over the bike. Good day out though.
Posted by El Diente at 19:19 2 comments:

Labels: never wear shorts for a photo
Newer Posts Older Posts Home
Subscribe to: Posts (Atom)
... I loved that basketball so much I even used to sleep with it under my pillow - maybe that's why I couldn't sleep...