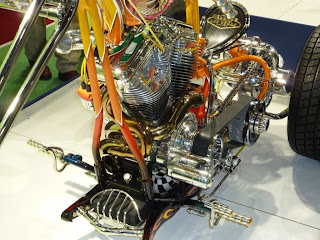 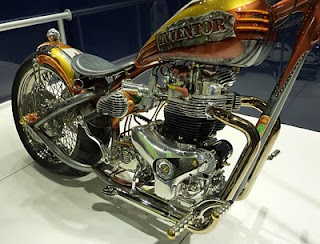 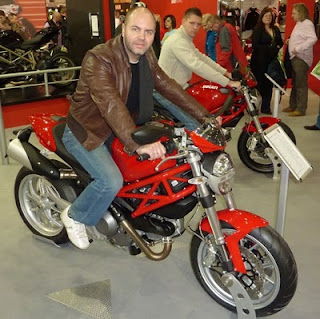 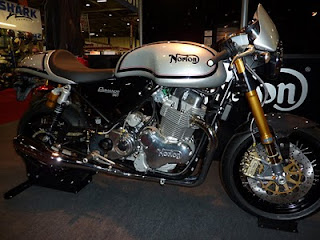 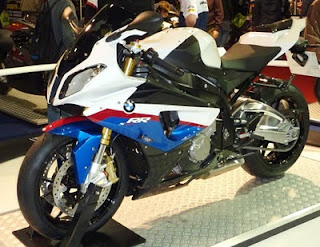 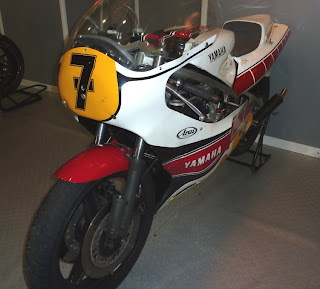 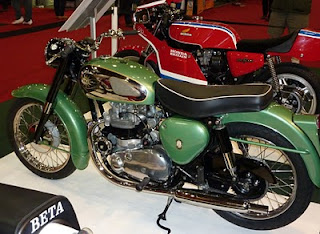 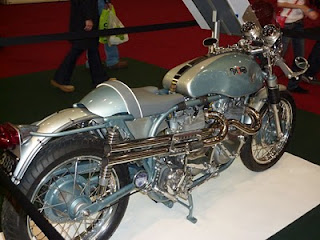 I flew down to London Friday night, stayed with my son. We'd made plans to visit the MCN Motorbike show, held out in Docklands in the Excel centre. Up early Saturday morning, caught the tube and were walking in the entrance at 9am. Got all excited by the shiny classic bikes on display, only to find the impulse purchase of a new camera at the airport hadn't paid off - couldn't get a decent picture! After a bit of fiddling with the menu I got a couple of reasonable photos, but most of them were too dark, which is a shame as I'd crept up behind a gaggle of scantily-clad MCN babes bending over........never mind.

El D jr. has his eye on a new bike, is finding his R6 a bit of a chore filtering through London traffic; I reckon either the Ducati Monster or the Triumph Street triple would suit him, but after looking at the photos I took we both decided he looked a bit gay on them, so it probably won't happen.

I did cheat on the GS a little, threw my leg over every bike there, but to be honest didn't see anything that took my fancy, so I guess we'll stick together for now. Suprisingly, we both left the show having bought absolutely nothing at all, most unusual.

Oh yeah, that new version of the Triumph Rocket 3 - the roadster; its a monster!
Posted by El Diente at 17:43 No comments:

So my Dad has fallen asleep Sunday afternoon beside the fire with the newspaper "news of the world" draped over his face, soothed no doubt by the gentle sounds of the Cliff Adams singers broadcasting on the light programme from our new radiogramme with their popular "sing something simple" musical harmonies. I turn down the volume and surreptitiously re-tune the radio to the new pirate station Radio 390 - DJ Mike Raven has an R&B programme called "Raven Around" where he plays all sorts of strange music by people with names like Big Bill Broonzy and Bessie Smith. Enthralled, I gradually turn the volume up until Dad is woken up with a start and shouts "get that rubbish off". He slowly gets up and walks over to the radio gramme and puts on his favourite LP by his fellow Dundonian, Jimmy Shand - Track 1 side 2 is his favourite "Bonnie Dundee". As the dreaded sounds of the accordion-playing Scottish nutter blast out, I run upstairs to my bedroom and try to tune my new transistor radio into Radio Luxembourg, but its after 7pm so the reception has gone and all I get is occasional bits of music and loads of static. I wonder why anyone would listen to Scottish country music when there's a whole new world of music out there, surely this year, 1961, must be the best ever for music.

Fast forward to 2010; bored with listening to the radio I scroll through the music selection on my ipod, everything from Abba to Zeavon. Still bored, I turn on the CD player and dig through the piles of CD's heaped all over the floor. Finally, I sit back on the sofa and listen to the soothing sounds of "Scottish Country music" - "the Ruby" being a particular favourite. AAAARRRRGGGHHHH! I'VE TURNED INTO MY DAD!
Posted by El Diente at 17:06 1 comment:

So now its official, this December and January were the coldest on record for Scotland since records began in 1914.

A couple of things struck me when I heard that on the news today; firstly, when they said "since records began" I expected the date to be a lot longer ago than 1914, considering Rabbie Burns banged on in great detail about his life and loves and spiders and haggis 200 years ago you would have thought he'd have mentioned the weather. In fact, we apparently know all the details of William Wallace's great battle of May 1297 including the names of the people who died, but no mention of whether it was sunny or wet that day. Strange. Although to be honest, as its always cold here in Scotland, and either raining or about to rain, I suppose no-one thought it that important to record the fact. Still, to put a personal perspective on it, my Nan would have been 20 before they starting recording the weather, which seems strange as she banged on about it all the time!

The other thing is - will all those people who've been talking about Global warming shut up and let us carry on riding bikes and driving cars without making us feel like we're destroying the planet? Probably not.
Posted by El Diente at 18:35 No comments:

Labels: not that long ago really, since records began
Newer Posts Older Posts Home
Subscribe to: Posts (Atom)
... I loved that basketball so much I even used to sleep with it under my pillow - maybe that's why I couldn't sleep...