Well this is written as an apology for the last couple of boring posts - I mean who wants to read about someone going for a ride when that's what we all do, right?

So I'm going to offer up a couple of excuses. The first is of course that I'm pretty boring anyway, what do you expect from a reformed alcoholic living alone in a remote cottage in the Scottish highlands making wildlife videos for fun?

The second excuse is......shit, I've already used that one.

So what happened was that a few months ago I developed a problem with my left eye, which the pretty young doctor lady told me was due to my age. It kept me off the bike for a few weeks only, although it hasn't got much better I've just put up with it. Then last week the other eye developed the same problem. Now I don't know about you, but it seems to me that once is an accident, but twice is more than a coincidence. This time the PYDL (AMAZING...I've only had a German bike for a few weeks and I've started to think in acronyms) mentioned the age thing again, then added in stuff like extreme short-sight and detached retinas.

That's when I panicked. I don't know about you, but I like reading and writing and looking at stuff, especially if it means I can earn a living as well, so I'm not too comfortable with the idea of giving up looking, especially if it means not riding the bike. So (here it comes...) the reason why the last post was so boring was because I was wobbling along at 40mph trying to judge corners and not fall off and so didn't have time to take in anything interesting. Yeah I know that sounds even lamer than the first excuse, oh and please don't say I shouldn't have been riding because some boring bastard in my office keeps going on about it as well.

Highwaylass has been summing it up recently in her posts - riding makes you feel alive. I know I still have a grin every time I get on the bike, even if I can't really see where I'm going.
Posted by El Diente at 18:14 2 comments:

Better than staying in... 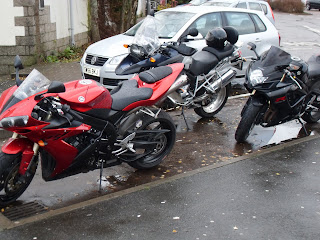 True to my word (see below) I've been using the bike no matter what the weather gods have thrown at us. Yesterday we had gale-force winds and torrential rain, but I still met a couple of the lads for a ride. Mind you, when we got to Ballater and saw the snow above the town we did turn around and beat a hasty retreat.

I'm pretty pleased with the GS, I'm using it in weather that I wouldn't have ventured out in on the Bandit, so thats a bonus. And it looks better all covered in mud as well. I also discovered that wet grass doesn't seem to offer much grip, even for knobbly tyres, so I'll have to stick to the mudslide, as I affectionately call my driveway, for access to the house.
Posted by El Diente at 12:46 No comments:

We had quite a heavy frost Saturday night, it looked like it had been snowing. Laying on top of the already iced-up dirt track down to the road, it was enough to make me decide not to go out for the Sunday morning ride - and anyway, Derek had just fitted new tyres to the fireblade so he wasn't going anywhere.

Looking on the bright side, that gave me time to fit some of the new goodies I'd bought for the bike. First on were the Tobinators (thanks for the tip, Nikos) which I'd hoped would be really complicated and trick-looking given their name, but turned out to be a couple of bits of metal with a slot in, but they fitted to the screen easily so that was a bonus. Next up was the carbon-fibre rear hugger which evidently weighs 1 oz, or maybe 10 oz, whatever, it was extremely light and sexy-looking and fitted well.

In fact it all went so well, including fitting the uprated bulbs, that I was soon faced with a whole day in front of me with nothing else to do. So..I cleaned the cottage!!! How sad is that. I even ironed a couple of shirts, made my dinner and watched X-factor on the TV. Oh and by the way what a twat that Simon is, he had a chance to get rid of Jedward and he bottled it.

So next week I'm going out on the bike even if I have to carry it down the track on my back.
Posted by El Diente at 17:26 1 comment:

How many Scotsmen does it take to change a lightbulb?

Labels: lightbulb
Newer Posts Older Posts Home
Subscribe to: Posts (Atom)
... I loved that basketball so much I even used to sleep with it under my pillow - maybe that's why I couldn't sleep...