New screen, that's a good excuse to take a day off work!

I thought of a couple of reasons not to go to work today - the weather forecast yesterday predicted another day of sunny skies and a temperature of 20 degC, plus last night I watched the DVD "On any Sunday" - cheesy yes, but it made me want to get out for a ride. I got up my usual early time but instead of going to work, fitted the little windscreen I recently accuired to Helga and we were off, riding aimlessly out of London into the Surrey countryside. The more miles I put on, the more I get used to the handling, although I did manage to get the back end sideways once, and not on purpose I should add.

Stopped for a cuppa at Box Hill; discovered that me and Helga fall into that uninteresting category - just an old slow bike (and an old geezer) to your modern road warrior; not old enough for the classic bike crowd. But I'm having fun, so who cares if no-one wants to chat. I've also managed to win a pair of elderly panniers on e-bay, so maybe some longer journeys could be on the cards soon. I am a bit concerned about the blue haze coming from the exhaust, but guess I just need to get used to owning an old bike. Cheers for now!
Posted by El Diente at 19:29 6 comments:

A walk in the park

The south of England has been experiencing unfeasibly warm spring temperatures for the last few days; today it was 22 degC (72 F) in London by lunchtime. I looked up at the clear blue sky from my basement office window and thought what the hell am I doing here? So I bunked-off work early, caught the tube back to Richmond and went over the park for the afternoon. Richmond park, for those who don't know it, is quite a big (3.69 sq miles) walled deer park. There's usually lots to see, so I took my camera and managed to take these photos. Not the greatest quality, but what a relaxing way to spend an afternoon!

﻿﻿
﻿ There's two types of deer - big and little, from which statement you can guess I'm not much of a naturalist.

﻿
﻿﻿﻿﻿﻿﻿
﻿﻿﻿﻿﻿ There's also a flock of parrots, which really is quite unexpected. At one time the story being told was that Jimi Hendrix had two parrots when he lived nearby, and they were released into the park when he died and bred there - unfortunately it turned out to be bull###t. Seems they just escaped from an aviary; they nest in the ancient oak trees which the park is famous for and make loads of noise flying around and squawking.

﻿﻿
There's also some cute-looking ornamental ducks brought over from China by the Victorians, plus of course those pesky grey squirrels from America. In fact, when you think about it, a typical multi-cultural mix, just like the rest of London. 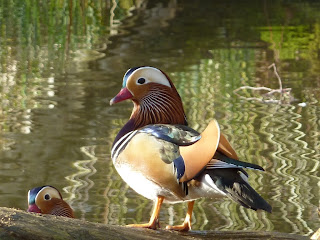 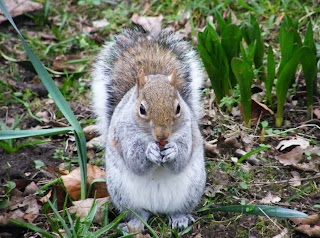 We do also have some native species....I'm going out on a bit of a limb here 'cos I don't really know if they are...but I took there photos anyway. 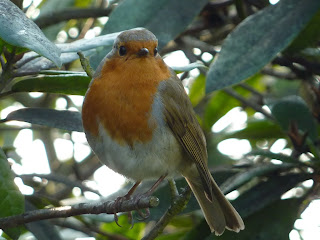 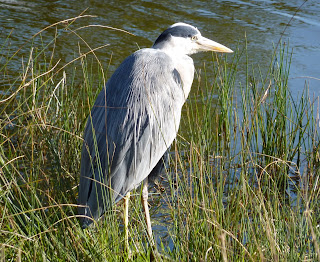 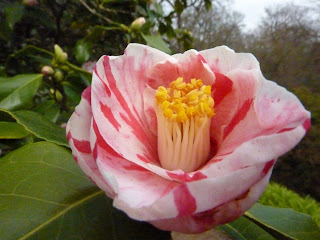 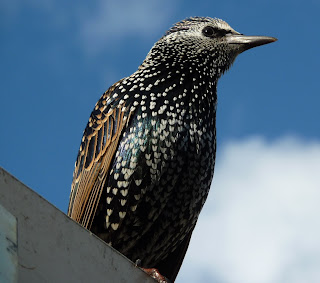 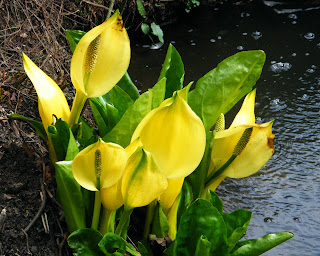 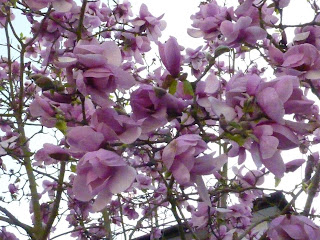 So if you got this far, I'll end with a disclaimer that I know nothing about flora or fauna, but I had a great afternoon in the Spring sunshine - and I promise the next post will be motorbike related.
Posted by El Diente at 19:39 5 comments:

A trip to the Surrey countryside with Helga.

I finally collected the BMW yesterday; my first reaction was to be slightly disappointed that it wasn't quite as good as the blurred e-bay photos had led me to believe, but there again, what did I expect for the money? Anyway, as soon as I set off on the road home I cheered up, everything seemed to work well, although the front end felt both wobbly and wooden (technical terms these) at the same time - I stopped a couple of time to make sure I didn't have a puncture! Still, we managed to 60 mile trip home with no problem, and after a quick wash Helga looked quite respectable.

Fired-up with enthusiasm, I was up and out early today for a ride; it started off as just an aimlessl ride out to the Surrey countryside, then I saw a sign for Brooklands, the world's first purpose-built motor racing circuit. 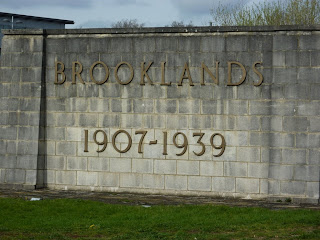 A look at some of the early cars and bikes then a wander up to the banking left me amazed that those rickety-looking machines were piloted at speed round here. 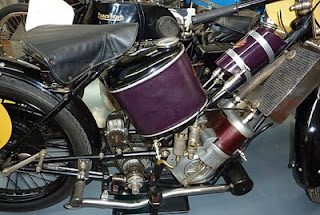 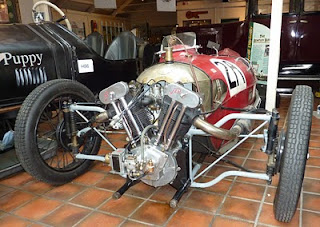 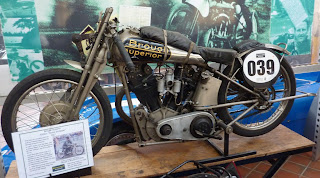 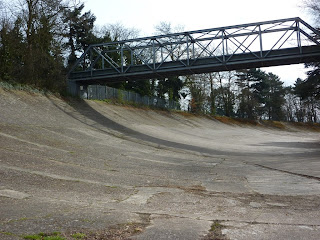 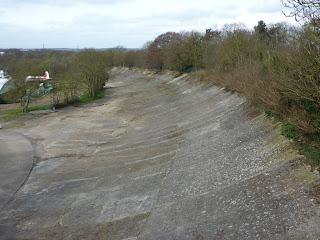 The Brooklands museum is pretty interesting; as the place was originally used to develop cars, bikes and airplanes the whole place is like a big boys playground, lots of machinery and bits of planes scattered around to investigate, plus all the old sheds and buildings full of racing memento's from days of yore - well worth a visit if you're in the area. 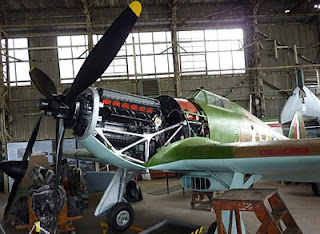 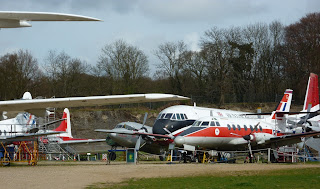 While wandering around the motorbike shed I spotted a white-overalled chap moving a combination out into the sun, so walked over to have a look. It turned out to be a 1933 Brough Superior, which Mr Brough (no, really!) explained to me was used by the West Riding Police. 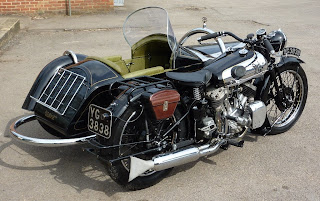 He then persuaded me to sit on it and took my photo. I did offer to swap it for Helga and some cash, which for some reason send him into fits of laughter - guess it's worth quite a bit of money, then? 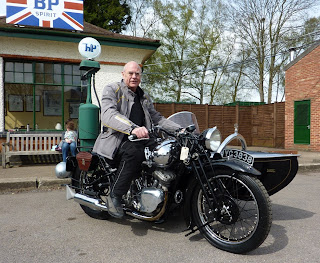 There also seemed to be quite a bit of car-related activity; a porsche club meeting in front of the clubhouse, a Roll Royce meeting on the lawn, and a dead-hard looking Lagonda, which was driven by a real cad, all pencil moustache, flying jacket and co-respondent shoes, parked out front. 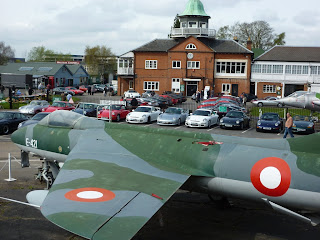 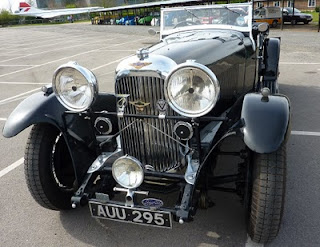 After a quick cuppa I was off again, more aimless riding down towards Guildford and Farnham where there were some smashing little lanes to ride down (and back again, and down again); starting to get used to the feel of the front end now, although I suspect it needs some serious work. With the sun stlll shining but wrists and bum aching from the unaccustomed riding position I eventually headed back up the A3 towards London; Helga cruised quite comfortably at around 80mph, which was about the fastest I could hold on at without any wind protection, although I did briefly do a Mr Toad impression, crouched down on the tank she wound up to 3-figure speed pretty quick so maybe a screen should be high on the list of 'improvements'.

Got home, and in the road outside was parked this pretty Alfa - I was amazed how small it was! 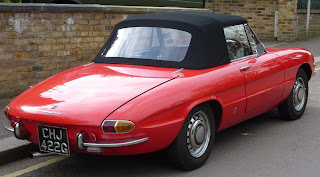 So, a good weekend at last; funny how a motorbike ride can banish all the depressing thoughts and boredom of modern living. Cheers!

Late Postscript - I've been reading-up online on the K series and their problems; my wobbly front end seems like knackered bearings/forks, and the problem I was getting changing up into 41/2 instead of 5th gear is a clutch spline problem. Evidently. Sounds like I'm going to need either a good mechanic...or get her up on e-bay quickly.
Posted by El Diente at 18:10 5 comments:

Labels: Brooklands, Brough Superior, Helga
Newer Posts Older Posts Home
Subscribe to: Posts (Atom)
... I loved that basketball so much I even used to sleep with it under my pillow - maybe that's why I couldn't sleep...