An unexpected day in the sun

Wow, this has been a roller-coaster 24 hours! Yesterday evening I somehow got sucked into one of those pointless arguments about nothing with LF, only this one escalated into the full-blown screaming kind where all reason goes out the door. So I followed in a mad rage slammed door mood into the rainy night. After walking around kicking dustbins and passing cats I finally calmed down and made my way back to the flat. Trouble was, reason hadn't returned with me so I decided to sleep in my car (huh, at my age!). Anyway, the expected fitful nights sleep ensued, waking at each night sound until the early morning light stopped me dozing, and I got out of the car to stretch. Wonders! The temperature had somehow risen to almost warm. Luckily I keep my motorcycle gear in the boot of the car as there's no room in our tiny flat, so I was soon togged up and riding off. Would you believe me if I told you I actually got too warm by about 11am, and had to unzip the jacket vents! It's like nature decided we'd suffered enough this spring; frosty on Friday morning, now Sunday is 18degC! Wherever I stopped, the cafes had dozens of bikes outside, people walking around in tee-shirts, ladies in skimpy shorts, Oh and by the way ladies, if you don't want guys looking at your cleavage, don't stun us - thick jackets and bulky sweaters to low cut tops in one day is just too much to take! Anyway, the ride today has been great, I'm resting now in a little park somewhere, drowsy in the sun. Guess I'll soon have to go home and face the music (and get a shower), but I'm going to try and keep this feeling going a bit longer. Thank you Father Sun for cheering up my shit day!
Posted by El Diente at 16:09 5 comments:

A fine day for a road test

A welcome change in the weather, Saturday dawned bright although still very cold. It seemed like the perfect time to try out the new heated grips, so I went out on one of those aimless rides that are so enjoyable. I headed down the A316 into Surrey, then decided to call in at Jack Lilley Triumph as they usually have hot coffee and some interesting bikes to look at while warming up. The new paintjob on the Bonneville really took my eye - shame its too small for me. 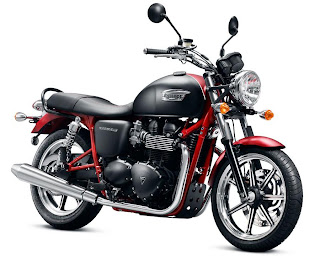 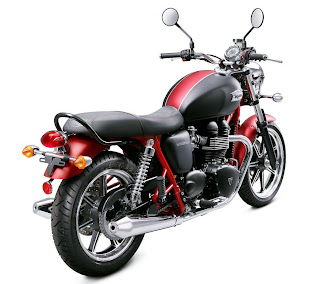 Anyway, as I was admiring it, I got chatting to one of the salesmen, and ended up taking a Tiger 800 out for a test. It seemed quite nippy along the dual carriageway, running up to 100 quickly enough and feeling very stable, although the noise generated by the tall screen was pretty high. Off into the twisty lanes and it handled quite well, all in all it did what it should for a new bike - it all worked, except that is for the gearchange, which was notchy and seemed to have more nuetrals than gears. The seat also seemed pretty hard and unforgiving; I mentioned both of these points to the salesman when I got back to the garage, he reckoned the gearbox problem was due to an incorrectly adjusted gear linkage, which you would have thought they would have rectified before letting their demo bike out! Obviously the seat problem could be rectified by eating more meatballs. 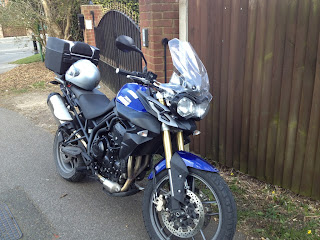 I realised I wasn't far from the local Suzuki dealer, so decided to take the chance to ride over there to see if I could get a demo ride on their Vstrom, as that seems to be the bike closest to the Tiger, on price anyway. What a revelation! It was comfy, relaxed, not that much slower than the Tiger and also did everything a new bike should, including changing gear easily! One thing both bikes had in common is that they were quiet, whooshing along rather like a motorised refrigerator. 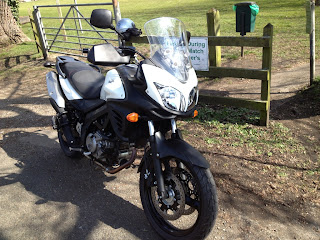 Its good to ride these new bikes; firstly to help with that decision as to what to buy when funds allow, but also to put into perspective the views expressed in those bike magazines that seem to think these bikes are slow plodders. They're fast enough for me. Strangely enough, once I got back on the Triumph, it didn't seem much slower, and with the soundtrack from the exhausts bouncing back of the trees was actually more fun. I got home with a big smile on my face.
Posted by El Diente at 10:25 6 comments:

New bits for the bike

With the weather here still bitterly cold, I fitted a windscreen I’d had sitting in the back of the garage since last summer, in an effort to keep the cold at bay. I’d also bought a pair of wrap-on heated grips at the bike show, so thought I’d fit those as well. The fitting went well, once I’d realized that the six pages of instructions for the screen fitment were in fact one page repeated in six different languages (I know..but I never read the words, just look at the pictures).


So, all kitted up, I went for a ride. The screen sort of does its job of keeping the wind off my body, but is very noisy and creates a hell of a turbulence at the top of the screen, enough to move my head around and blur my vision at 60mph. So that’s coming off again. The heated grips worked well, although due to the design of being wrap-on, they inevitably make the grips much larger diameter; probably not suitable for Ladies with small hands. Still, I only envisaged them as a temporary measure, to be removed whenever the weather warms up a bit.

I still only managed 10 miles before the fingers stopped working though – let’s hope spring soon arrives with some warmer temperatures.

Labels: new screen., wrap-on hot grips
Newer Posts Older Posts Home
Subscribe to: Posts (Atom)
... I loved that basketball so much I even used to sleep with it under my pillow - maybe that's why I couldn't sleep...