Its not all grey

So I was reading the thread over at Trobairitz' blog about posting a colourful photo to relieve the grey winter days, and reflecting how impossible that would be here in Holland - grey skies reflecting in the grey water of the canals, grey buildings, grey cobblestones....then I got to work and they'd moved this big yellow box out of the main fabrication hall and parked it outside my office. Result!

Anyway, I'm out of here tomorrow, flying down to Menton, France to join LF for a 2-week Xmas break - hope you all have a good holiday!
Posted by El Diente at 19:55 9 comments:

It's been a bit of a hectic weekend; I got a quick trip home to London, although LF wasn't there. That left me free to visit family and catch up (more later). First priority though was to drive up to Birmingham where there was a motorbike show on at the NEC. As I'd never been there, I was interested to see how it compared with the London Excel show.

﻿﻿﻿
There seems to be a few new bikes announced recently that I was keen to see and sit on, just in case I do ever manage to sell the Trumpet. Don't know why, but the two that piqued my interest before-hand were the new Indian, and the Suzuki V-strom 1000; two very different bikes of course, but there's no logic to boys toys, is there. The Suzuki looked as expected, was a nice size for me if a bit unexciting; not so the Indian, which looked really well made and put together, but useless for a long-legged chap such as myself.

I then decided to sit on every bike in the show to save time later when and if I do make a change. The big BMW's were all good, size-wise. Unfortunately all those lovely café racers from the likes of Norton, Triumph and Royal Enfield looked gorgeous but were too small. I guess 6ft 3in, 15 stone arthritic pensioners (moi?) need to be more sensible with bike choices. 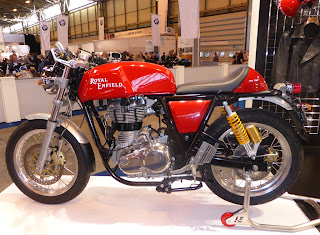 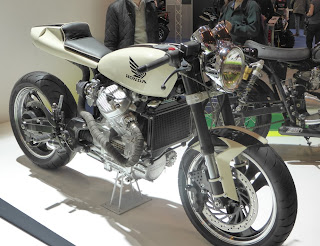 Anyway, show explored it was hotfoot back down to London in double quick time to visit the kid, who has just become a Dad; guess that makes me a Grandad. Spent a nice afternoon cradling the little feller and chatting. Good to be with family for a while. Labels: grandson cuddled., new bikes looked at
Newer Posts Older Posts Home
Subscribe to: Posts (Atom)
... I loved that basketball so much I even used to sleep with it under my pillow - maybe that's why I couldn't sleep...