I flew back to London on Friday with the intention of bringing the bike back to Holland with me, although as usual hadn't made any real plans. Saturday morning I rode down to the Triumph dealer to see if any of the accessories for the Tiger had arrived; they had, but it turned out that they were so busy they didn't have time to fit them for me. So I collected the dinky tank bag and went home. The weather was glorious, so I decided I might as well make the most of it, packed a few bits and pieces and set of for Folkstone and the Eurotunnel. A gentle run around the M25 & M20 motorways saw me there in no time, paid for a single ticket & rode the bike onto the train. Unlike other times I've used it, there were no other bikes travelling so I got a compartment to myself.


Unfortunately the train then didn't move for the next three and a half hours as the one in front had broken down in the tunnel, so I just sat on the floor and waited. Eventually we got through and I was faced with a night ride. So I wimped out, rode into the centre of Calais, found a Holiday Inn and stayed for the night. I felt much better Sunday morning, got up late, had a huge breakfast and set of mid-morning to ride up to Holland. France was dispatched quite quickly as I decided to ride down to Ypres in Belgium to visit the First World war military cemeteries dotted all around the area


I must admit I'd hoped for lots of twisty little roads to enjoy and get used to the Tiger on, unfortunately Belgium's main scenery seems to be lots of fields with dead straight roads running beside them. Not a bend to be seen. I visited a couple of cemeteries; with the hot sun blazing down on the rows and rows of gravestones recording the thousands of young men who died in those pointless I became pensive and a little depressed. Such a waste of life.

I soon headed away across country towards Ghent, keeping to the minor roads I was enjoying the ride, starting to open the Tiger up having kept the revs down to 5000 for the first couple of hundred miles as advised by the dealer. A stop for petrol and a roadside snack saw me sitting in the sun pondering on the friendliness of the Belgians - well the young lady in the burger van smiled at me, at least. Realising I'd spent half of the day without getting much closer to my destination I joined the autoroute and headed north towards Antwerp. Using an iphone for a satnav does have its drawbacks (must get more organised!) as I had to keep stopping to figure out where I was; once on the autoroute a couple of hours of boredom soon saw me across the border into Holland, heading for Breda. Thinking I was quite near home I turned off onto a minor road to (hopefully) enjoy some twisties - yeah with my luck I'd turned off onto a cycle race route, all roads blocked and manned by police. An interminable time spent riding round in circles saw me finally back on the motorway, only to be confronted by a massive traffic jam caused by roadworks. On the bright side, it did give me a chance to practice filtering; I quite enjoyed sailing along between 10 miles of fuming motorists! Eight hours after setting off from Calais I arrived in Dordrecht and my little apartment in the city centre. No street parking allowed, so I managed to squeeze the bike in through the front door and left her parked in the hallway. A mini adventure indeed 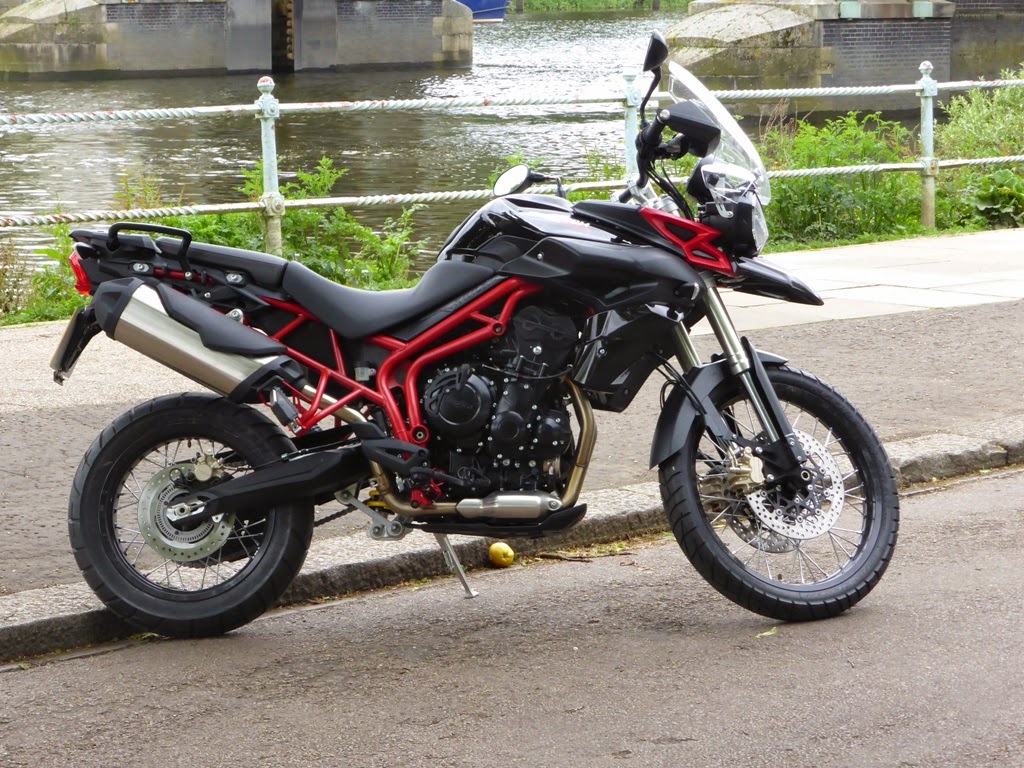 Saturday morning dawned wet and windy, which was a shame as I was collecting the new bike and hoped to get some miles on it. Then the realisation set in that I no longer had shiny aluminium and chrome to worry about cleaning, so it was off to my local Triumph dealer, Jack Lilley, to collect it. The salesman Geoff was apologetic that even though it was an SE version, the special equipment hadn’t actually arrived from Triumph, so the bike was minus the top box and heated grips although the tall screen was in place.

Don’t worry about that said I, I just want to ride the thing. Of course, the minute I set off the heavens opened but I carried on regardless with a mile-wide grin, a bit cautiously I admit as I remembered a story about new tyres and wet roads not mixing very well. I eventually had to stop when the puddles in the Surrey lanes grew to the size of lakes, fortuitously adjacent to a rest area complete with burger van. One large cuppa and a veggie burger later, the rain had stopped enough for me to carry on. I got home about an hour later, impressed that my seven-year old Revit jacket had not leaked, and that the new bike was filthy and covered in mud. 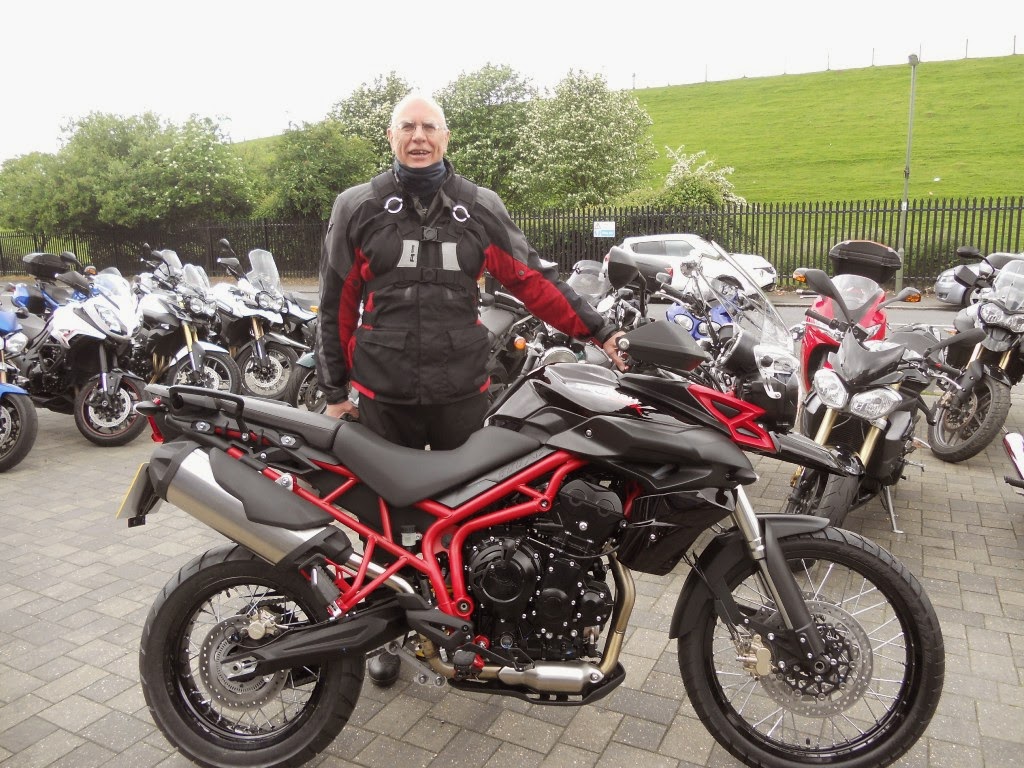 Old habits die hard though, so I could not resist giving the bike a quick wash down before putting it away in the garage. Sunday was equally crappy weather, but I still managed a gentle ride around for a couple of hours, explaining to LF that I had to run the engine in on the first weekend, as we intend to be riding to Holland next week. Hopefully.  Anyway, I was feeling so rebellious when I got home that the bike got put away dirty, now that’s a first for me. All-in-all an enjoyable weekend; first impressions are how nice to ride a bike where everything just works – no more looking around to see what just fell off!

Oh and just as a postscript – Geoff the salesman tells me that my old Thunderbird was a star of the small screen, having appeared in episodes of ‘Miss Marples’, or some such crap series. Still didn’t increase it’s trade-in value though!
Posted by El Diente at 18:04 9 comments:

Labels: TIGER 800 XC, wet weekend.
Newer Posts Older Posts Home
Subscribe to: Posts (Atom)
... I loved that basketball so much I even used to sleep with it under my pillow - maybe that's why I couldn't sleep...