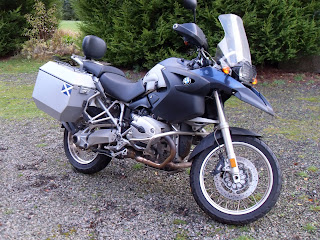 My goodness we've been having some awful weather up here - it's rained everyday for the last 3 weeks. So I thought it the perfect time to buy a new bike.

Having given up on my cunning plan to convert my bandit streetfighter to a touring bike, the penny finally dropped - that's it El D, buy a touring bike. So I bought this second-hand BMW 1200GS. And believe it or not, today dawned bright and dry so me and the bandit slid down the dirt track and off to the dealers to do the swop.

All proud, I took the afternoon off work to go for a nice long ride; pulled into a little petrol station up in the Highlands and the elderly attendant asked " Off touring then?" When I started to tell some story about where I was going, he stated "rubbish these modern bikes, too big, too tall, engines too big. In my day if you had a 500 you were top of the heap - best bike I had was a Norton Dominator, nice and low, threw a leather pannier on it and went of and toured switzerland and belgium...." shook his head in disgust and wandered away.

The good news is we despatched the dirt track up to the cottage with ease, and I felt strangely happy to see mud splattered all over the bike. Bit noisy with the screen though, I suppose I'll get used to it.
Posted by El Diente at 16:49 4 comments:

Labels: muddy bike, put in my place
Newer Posts Older Posts Home
Subscribe to: Posts (Atom)
... I loved that basketball so much I even used to sleep with it under my pillow - maybe that's why I couldn't sleep...