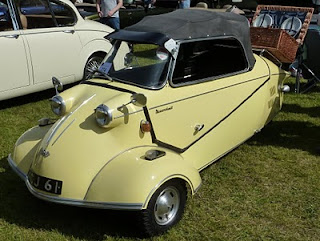 Funny how plans go wrong - I had the weekend all planned-out; Saturday I was going to ride down to Edinburgh, visit the Harley dealer then catch a couple of comedy acts at the fringe, maybe stay in a nice hotel....so I set off from Aberdeen in the rain, sat bored on the dual-carriageway down to Dundee avoiding the tourist caravans and spotting speed cameras - 10 fixed, 2 mobile vans and SIX police motorbikes in a 60 mile stretch seemed excessive. I stopped at the BMW dealer there to examine the range, but he only had 4 different bikes, so I went and got a cup of coffee, watched the rain chucking it down and decided to go home instead. 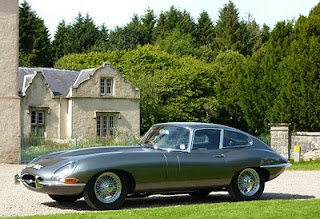 Sunday morning dawned dry, if cloudy, so, refreshed from 14 hours sleep I rode up north, across the Grampians to the north coast at Forres. On the way I spotted a sign for a vintage vehicle rally at Brodie castle, so after a quick lunch break at Findhorn village I made my way there.. Brilliant...the sun was shining, crowds of people quietly enjoying themselves and some cracking cars and bikes. 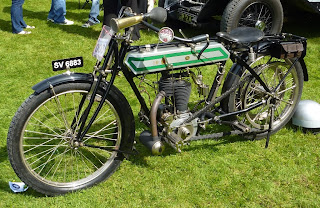 There were plenty of old British sports cars, and loads of 50's and 60's MGB's, Bristols, AC's, Jaguars etc. I also spotted an orange Sunbeam Rapier Holbay, probably the only one not rusted away; and 2 Hillman Avenger Tigers, again probably the only 2 left! 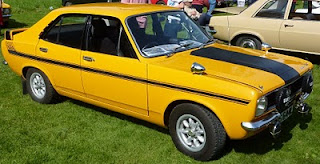 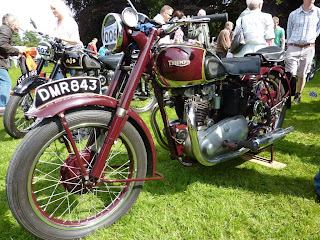 Lots of nice bikes - I've added a few photos; especially liked the vintage cycle with the engine attached on its own little wheel. 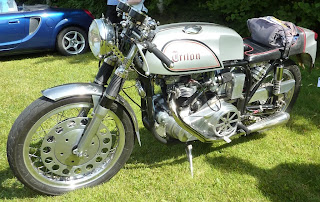 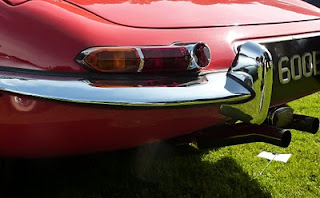 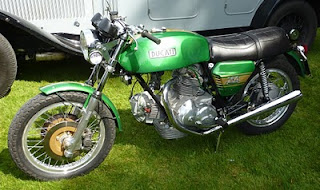 After spending a pleasant few hours I rode back home at an utterly ridiculous speed, got home knackered but very happy, and glad that plans don't always work out as I had the MOST enjoyable day today!!! 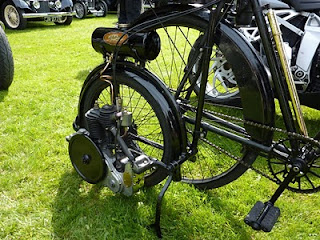 This photo shows the recent mods I've made to the bike. Most obvious is the MRA screen, the little aeorofoil on the top can be adjusted to divert windblast over the riders head; unfortunately due to this riders abnormal body shape the windblast now hits smack on the bottom of my crash helmet, still, thats better than the original screen which put the blast on my chest and gave me a permanent sore throat. Then there's the handguards which do well at protecting my arthritic fingers from chilly early-morning windblast; and finally you may see the bar risers I fitted to give me a more upright riding position, thus relieving my permanent back-ache. Result!
I'm also celebrating today as I heard that I've finally obtained the University degree I've been studying for part-time for the last 7 years. I'm off tomorrow to buy a white lab-coat, some test tubes and a bunsen burner to start experiments in the garage; meantime I did consider going to the local drinking establishment and getting well oiled, but as that would probably lead to months of binge drinking and pain I decided instead to sit in and watch a re-run of American Chopper with a 12" pizza and a carton of - it says here on the box - truly irresistable triple chocolate cookies coated in indulgent Belgian chocolate with milk, dark and white chocolate chunks. Yummy.
Posted by El Diente at 18:32 4 comments:

Labels: chocolate chip cookies., lab coat, new screen
Newer Posts Older Posts Home
Subscribe to: Posts (Atom)
... I loved that basketball so much I even used to sleep with it under my pillow - maybe that's why I couldn't sleep...