There's been a few changes in the El D household recently; one was leaving my hovel and moving in with LF ( of the Jaguar adventure). I've gained considerably, as not only is the apartment nice and bright, there's also a garage at the rear in which to store and work on motorcycles :) - I also have a slightly smarter appearance as freshly ironed shirts appear in my wardrobe, seemingly by magic. I'm not exactly sure what I have to do in return, apart from being my usual happy-go-lucky self.***

On the motorcycle front, Helga has gone. I must admit I was a little uncomfortable, both with referring to an inanimate object by female name, and also 'cos the handlebar position hurt my wrists. I thought about modifications, but decided to move her on to a new home. I've now got a ratty Triumph to commute on, although as usual with all my impulse e-bay purchases this one is slightly lacking, mainly in the braking department, as the suprised schoolboy who stepped onto the pedestrian crossing in Kingston found out; I did wave as I swerved round him with the brake lever fully on and no apparent diminishiment (not sure if thats a word) in speed to try and convey an apology, but his two-fingered salute makes me think he mis-understood. 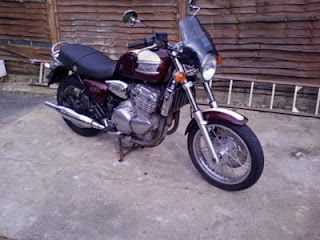 Anyway, as usual I'd already started buying some completely necessary chrome parts to bling it up, so the budget is a bit lacking; investigation of the internet forums (yeah, should have done that before I bought it) seems to indicate that the standard brakes are crap and I need to shell-out £500 for a Norman Hyde brake conversion. So at the moment I'm still commuting on it, but VERY slowly and with almost painful anticipation of the traffic conditions. It's still fun though.

Labels: brakeless triumph; freshly-ironed shirts
Newer Posts Older Posts Home
Subscribe to: Posts (Atom)
... I loved that basketball so much I even used to sleep with it under my pillow - maybe that's why I couldn't sleep...