Last Saturday I had to fly up to Hanover for a 6 month check-up and maintenance treatment; I suppose I could have flown directly from Malaga to Hanover, but I took the opportunity to fly via London and spent the day with my son and grandson. Then on Sunday flew to Germany, ready for Monday morning treatment. Hanover was freezing cold and snowing most of the week, the less said about that the better!

I flew back to London this Saturday and spent the afternoon with my daughter, so that's the family caught up with. By a quirk of fate, this weekend was the London Bike show at the Excel centre, but also the London Classic car show at the same venue, which was most unusual. As I had the day free I decided to hit them both, and my son decided to come up and meet me there. I got up early and drove through East London, got to the Excel before they opened so was one of the first in line when the Bike show opened at 9am. I have to admit I was a little disappointed, it wasn't half as good as the NEC show in Birmingham I went to last November. 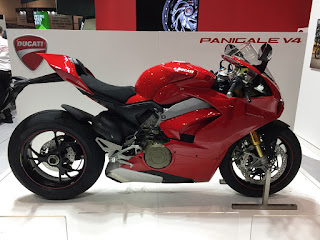 The new Royal Enfield with the new twin-cylinder engine looked to be a good buy at just under £6k, other than that it was just the usual stuff, although the scantily-clad dolly birds were notable by their absence this year, guess that's the modern age we're living in, eh?

After I'd been there about an hour, my son turned up. He was on a bit of a tight schedule, so we decided to go straight over to the Classic car show. We were virtually the first people in the hall, as you can see we were strolling around the big empty spaces taking it all in virtually alone. That soon changed though!! There was a very eclectic collection of cars there, all of them completely out of my price range, but all were absolutely immaculate. 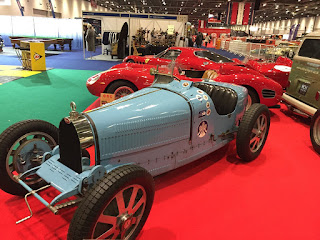 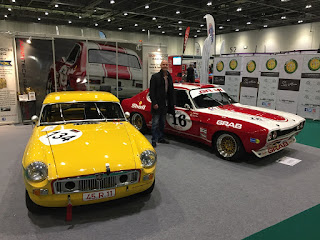 Actually there was one car that really caught my eye, this lovely little Fiat spider was immaculate, only one lady owner and 50,000 miles, spotless inside and out. I sat in it, looked at the engine, fell in love with it. The seller even pointed-out how cheap it was at £22,500. Must buy a lottery ticket! 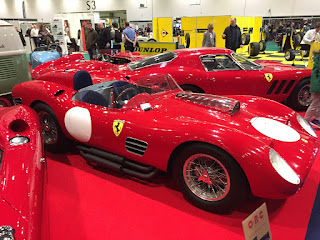 The hall itself was absolutely packed with cars, then in the centre they had a track laid out with various classics driving up and down,most notable was ex-world champion brummie Nigel Mansell, who managed to drive his old F1 car at a fair speed down the track, do donuts at one end then back again all with a huge grin on his face! A much better experience that the bike show, especially with all the upmarket stalls selling wine & stinky cheese, none of your burgers and coke in here!

All-in-all we had an enjoyable day there, the son left around 1pm to get the train home, I hung around, got some veggie lunch then back to my little house in Essex. I'm off tomorrow morning to fly back to Malaga, but here's where I go off the rails a bit, so to speak.

I got a bit angry and upset during the week in Hanover; got some results that show that pesky cancer is making a comeback. After a couple of days soul-searching, I decided, well, actually I didn't decide much apart from wanting to forget about it all. So for some reason that I can't actually remember now in the cold light of day, I booked myself on a flight to Aruba next week. So I have to fly to Malaga Monday, collect my clothes and move out of my rented flat, then back via London to Amsterdam then on to Aruba.

To be honest, I have visited the island before; when I was working in Venezuela the company used to send us there to renew our visas, I remember it had white sand, blue sea and was hot all the time. I also have thousands of air-miles with KLM that have to be used this year or I lose them so I'm getting the flight down for free.

So I'm going to be a beach bum for a month, try to face up to my problems and figure-out what to do when I get back.
Posted by El Diente at 17:38 6 comments:

Finally made it to the top!

I've been training to do the hike up the mountain to the cross of Juanar; I've been averaging 7 kms a day up in the sierra for the last few weeks, hoping to make it up and back without knackering myself. With a cloudy day forecast I decided that last Thursday would be a good time to attempt the hike; it may not be that warm (14degC) but the sun on my back all day would make it just too hard.
I set off bright and early(ish), the first couple of miles were part of my training route so seemed quite easy. The guide book then said that the trail now "goes up fairly steeply" which seemed to be vertical!
I'd decided to stop every hour for a 10 min rest; after 3 hours fairly hard going I reached the top of the hill just below the rocky outcrop where the cross is sited.

So far I had not seen a single person or heard a sound apart from birdsong, fair to say I was in good spirits. Now as I just had to make the last ascent the sun started to break through the clouds, I have to say it all looked beautiful. I scrambled the last few hundred yards to reach the flat top of  the mountain, there was an iron cross and a small shrine to the Madonna with fantastic views 360 degrees around. 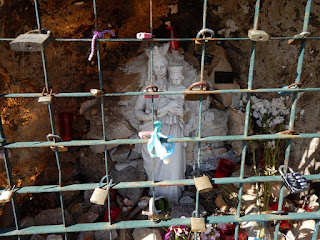 The story goes that some fishermen were out in bad weather, fog descended so that they had no idea where they were, then magically the fog cleared high up on the mountain so they could identify the distinctive shape of 'La Concha' and so return safely to port. In gratitude, they erected a cross & shrine on the peak adjacent to 'La Concha' - Juanar. I'm not sure how the hell they managed to get it up here, I was knackered just carrying my rucksack with apples and water in it!!

After a nice rest and some packed lunch I began to make my way back down. The route is circular so instead of the rocky scramble I had coming up, the descent first went down through a lovely forest full of the fragrance of pine and a nice soft carpet of pine needles, that's where I came across long lines of caterpillars marching along head to tail. 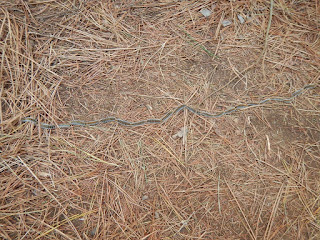 A bit further on and I looked up to see fluffy white flowers on the tops of the pine trees - never seen those before. 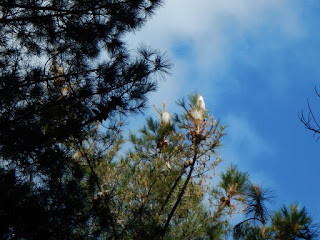 The trail then came out into the open and continued descending on a lovely sandy path with views all around down to the sea and Marbella in the distance. I may have been a little light-headed by this time, as I came around a corner and looked across the valley, there was a rocky outcrop that had the appearance of a Chinese warrior guarding the entrance to the mountain (WTF!) yeah I know - I even took a photo of it.


Just to rub in the strangeness of that thought, around the next bend I surprised a small group of 8 or 9 Spanish Ibex (no really) but by the time I got the camera out they were gone.


I finally got back down to the bottom where I'd left the car, it had taken eight hours, but that was including stops & lunch. I felt really happy, not too tired. My smartphone said I'd walked 15 kms and 1600 metres in height. Lovely day (apart from that little wobble ;) 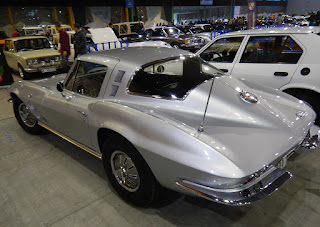 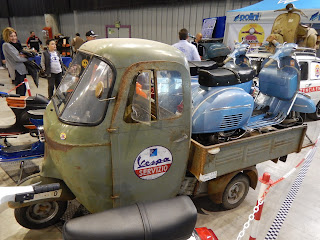 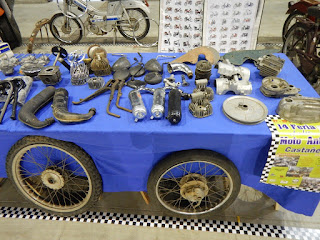 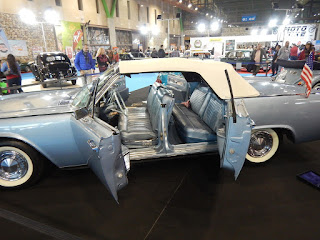 Labels: Malaga retro more photos
Newer Posts Older Posts Home
Subscribe to: Posts (Atom)
... I loved that basketball so much I even used to sleep with it under my pillow - maybe that's why I couldn't sleep...