I rode over to deepest Essex on Sunday, it was my Mum's 92nd birthday. It was a bit of a slog around the M25 motorway, but once I got close I was able to turn off and ride through some of the little lanes around Brentwood down to South Ockendon where she lives. We usually go out for lunch on these occasions, but she's getting a bit wobbly on her feet. I did offer to take her on the back of the bike - the weight of the crash helmet almost toppled her over, so we forgot that idea.

So I spent a few pleasant hours soaking up the sun in the back garden, chatting to Mum and the neighbours. I must admit I left a little earlier than I should have, as I had it in my mind to ride again on the lanes than I'd learnt to ride on as a teenager; back then I soon progressed to grinding away the edge of the footboards on my Lambretta TV175, cornering in a shower of sparks round the twisty bits. I'm a bit more sedate nowdays, but still had a very enjoyable ride through Cranham, Upminster and on through Brentwood before making my way back up to the motorway and the slog home. I did pause to take a photo in front of St Nicholas church; this is memorable for a couple of reasons. It is one of the few 11th century Norman churches built with a round tower, and 42 years ago I got married there to the first Mrs El D. Fortunately I long ago escaped from the clutches of that particular nutter, although there have been a few more since.

Labels: Granny on a bike, scene of the crime.

Back in the UK after my flying trip to Holland, weather still hot and sunny so I decided to take LF away for the weekend..or maybe she told me I had to, can't quite remember ;)
Anyway, Friday night we drove up to Shrewsbury in Shropshire. Spent a sweltering day Saturday strolling around this picturesque medieval town. Despite a catastrophic fire in 1593, most of the town was rebuilt on the old street plan, so it's full of charming little lanes with Tudor buildings leaning this way and that way.

Late afternoon we drove out to Church Stretton, a charming little village nestled in the Shropshire hills, and went for a hike. Nothing too exacting, fairly gentle walking in pleasant scenery. It was so enjoyable we went back again on Sunday morning, after a huge breakfast in our hotel, and set off to walk up to Pole Hill. It may not have been the best timing, seems like the hottest weekend (again) this year - 31 degC. Still, there was a nice breeze once we'd trudged up the valley to the ridge.

Drove home Sunday evening - that was a nice relaxing weekend.
Posted by El Diente at 07:20 3 comments:

The hottest day of the year so far, Sunday seemed like a good day for me and the kid to go for a ride out. Our destination was to the Jailhouse cafe, which I'd seen advertised in a classic bike magazine; its an old converted 50's bus, and it's parked next to a classic bike shop down in the wilds of Kent. It was the first time out for the kid this year, his Aprilia has spent most of the last few months having various repairs done (he dropped it) so it was a 'steady' ride for the first hour or so. We practised my usual method of navigation, ride in the general desired direction of travel down any road that looks interesting, then when lost, stop and look at google maps on the iphone. Repeat until you get to destination. So it was 21/2 hours and a number of wrong turns before we got there. 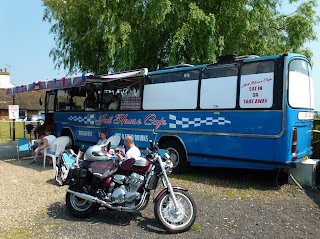 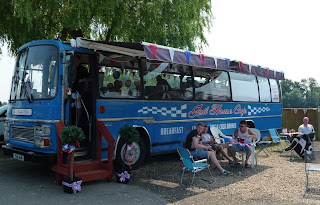 The bus had been converted very well, and seemed to be quite popular, judging by the number of customers. The adjacent bike shop was hampered by most of it's bikes being very rough and ready - they also sell old custom bikes, but these were mostly home-built choppers that looked extremely unroadworthy. After a plate of chips and a mug of tea (what else?) we set off back home, with the idea of completing a big circle - with me leading it was pretty much a repeat of the journey down. There was only one little incident when the kid hit a patch of gravel on a bend, I was behind at the time and it looked like a fairly buttock-clenching moment, but he managed to keep the bike upright. Maybe we need to slow down a bit! 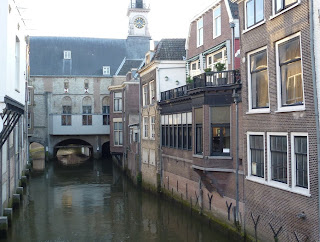 This week I'm in Holland, in Dordrecht on business. Had a stroll around the old town centre last night, very pleasant. Its all a bit unexciting here, work mostly, but a nice break from mad London.
Posted by El Diente at 06:06 6 comments:

Labels: Jailhouse cafe
Newer Posts Older Posts Home
Subscribe to: Posts (Atom)
... I loved that basketball so much I even used to sleep with it under my pillow - maybe that's why I couldn't sleep...